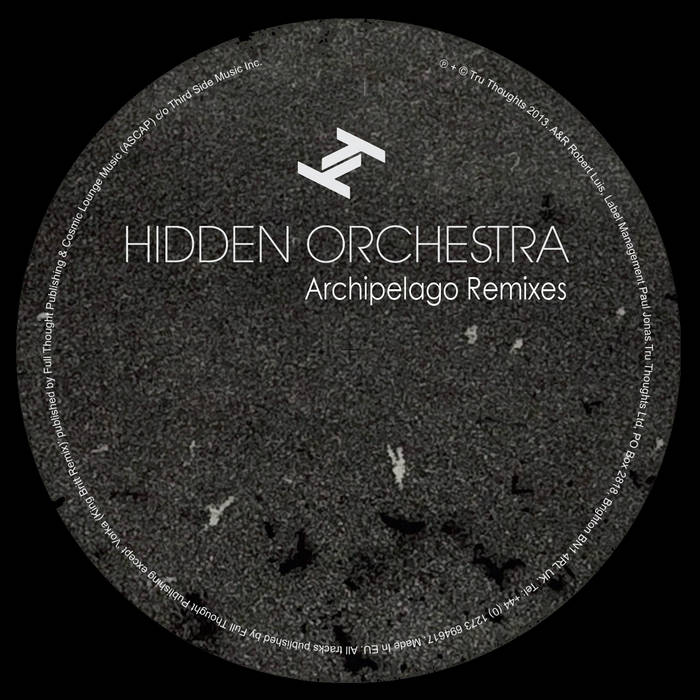 Out on a limited edition, hand-numbered and signed double 10” vinyl, the “Archipelago Remixes EP” by Hidden Orchestra is a real treat, with reworks from King Britt, DC Breaks, Kelpe and Long Arm providing a fresh spin on tracks from 2012’s hugely acclaimed ‘Archipelago’ album. Highly intricate and beat-heavy, the Hidden Orchestra originals are an adventure playground for any remixer, and the results from this eclectic array of talent are stunning and intriguing in equal measure.
The DC Breaks Remix of “Vorka” sees the pair of Andy C protégés twisting the ethereal beauty of this track, which originally came out as the second single. Possibly the only drum ‘n’ bass track to feature a hook played on a musical saw? On the flip, King Britt’s Remix of “Vorka” finds the revered DJ and globetrotting musical multi-tasker turning the same original into a slow-burning house cut, with added vocal hooks.
The second 10” opens with Fourth Wall (Kelpe Remix). Slowing the tempo and upping the oddball factor, London based producer Kelpe, whose fans include Huw Stephens (BBC R1) and Tom Ravenscroft (6Music), strips back bandleader Joe Acheson’s dramatically layered composition and rebuilds it with the highly original rhythmic style that has established him as a heavyweight talent. “Reminder” is reworked into a high definition ambient soundscape by Long Arm (Project Mooncircle) whose jazz-influenced style has had major props from the likes of Mary Anne Hobbs and Gilles Peterson.
Since its release in late 2012, the ‘Archipelago’ LP has gained heavy press support including Q, Clash, The Independent, BBC Music, The Scotsman, The Line of Best Fit and Wax Poetics. This mesmerising music has also hooked daytime and specialist radio tastemakers alike, with play from Stuart Maconie, Lauren Laverne, Gilles Peterson, Cerys Matthews, Nemone and Huey Morgan on BBC 6Music; as well as Ally McCrae (BBC R1 Introducing), John Kennedy (XFM), Goldierocks (Selector), Late Junction (BBC R3) and Jamie Cullum (BBC R2).
The first single from the LP was “Flight”, which has now had a staggering 850,000 Soundcloud streams; “Vorka” followed, further highlighting the band’s genre-defying appeal with a premiere on The Line Of Best Fit. The third single “Fourth Wall” was highlighted by Lauren Laverne as a ‘Headphone Moment’, and also saw BBC 6Music colleagues Gideon Coe and Tom Robinson joining the ranks of fans in high places.
The brainchild of producer and composer Acheson, Hidden Orchestra is a studio project of distinction and depth, utilising an array of sonic sources including found sounds alongside a boundless range of instruments. In the live arena the music is taken to a new sphere; the core quartet is formed around the duelling drum kits, percussion and electronic pads of Tim Lane and Jamie Graham, completed by Poppy Ackroyd’s multi-faceted violin and piano playing and Acheson’s bass and original samples. Ever in-demand, Hidden Orchestra have completed two tours of the UK and Europe in the last six months alone, and are set to tour a newly developed full AV spectacular, following a huge show at the Forum, London on 29th June, and a busy festival season.